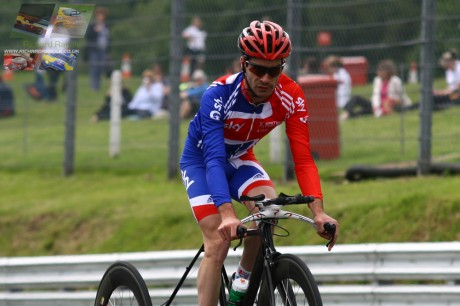 One of the favourites to claim a gold medal at the Paralympic Games Road Cycling at Brands Hatch is David Stone MBE, and he took time out of his schedule to speak exclusively to MSV about the Games.

Stone competes in the T2 category for tricycles and will race in the Time Trial as well as in the Road Race, the two events in which he claimed gold in Beijing 2008.

“My training has been going well, particularly the last part of it and I’m looking forward to racing at Brands Hatch,” said Stone, who has Cerebral Palsy.

“My dad used to be very keen on motorsport. As a boy he enjoyed motorbike racing so he would cycle down to Brands Hatch to watch it, so it will be nice to race there.”

After taking up cycling at the age of eight, David joined the GB Para-Cycling team in 1995 before making his international debut in 1996 and has since gone on to claim gold medals in both Paralympic and World Championship events, before being awarded the MBE following the Beijing Games.

Stone, along with many of his ParalympicsGB team-mates experienced Brands Hatch first hand at a recent test day held in June, and was impressed by the challenging layout: “It’s trickier for the tricycle because there’s lots of camber there, the corners are harsher and the cambers are going the wrong way which makes it a very difficult course. The most enjoyable bit is when you go under the bridge (Pilgrims Drop) then you drop down and there’s a right hand turn (Surtees) and that bit is very quick and nice, I think it’s going to be a good track for me!”

German competitor Hans-Peter Durst and Italian Georgio Ferroni have been singled out as his main rivals for Gold medals at Brands Hatch, whom he describes as “very good riders”.

Like many sportsmen, Stone has his own pre-race ritual: “I normally break something prior to riding, normally something has to go wrong in order for it to go well!” he joked.

As for his chances of repeating his gold medal haul from Beijing? “Ask me next week!”