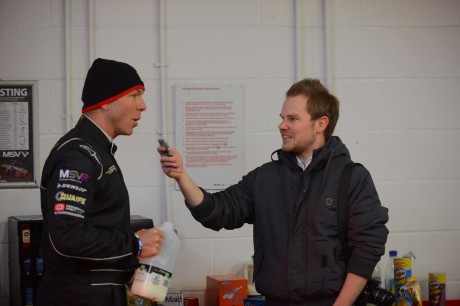 Great Britain’s most decorated Olympian Sir Chris Hoy visited Brands Hatch for a test day recently as he continued his preparations ahead of his UK motorsport debut in the Radical SR1 Cup.

The 37-year-old Scot, who claimed his sixth Olympic gold medal at London 2012, will exchange his handlebars for a steering wheel on the Brands Hatch Indy circuit for his first race on Saturday 1 June, and admits the excitement is already building.

“I can’t wait to get racing!” he exclaimed. “It’s been quite a long time coming and we’ve still got a few more testing sessions and track days to go, but it’s been brilliant fun so far.

“The people at Radical are a friendly bunch and a great group of guys and I’ve been made to feel very welcome here.”

Hoy has already sampled motorsport on one previous occasion, finishing second in a celebrity race in front of the F1 paddock at the Australian Grand Prix in March, but the event on 1 June will be his first in front of UK fans.

“The celebrity race was great fun, especially being on the circuit when the Grand Prix was on, but it was in cars that are a far cry from the Radical SR1. But it gave me a little taste of what it’s like to be on the grid, to feel the adrenaline and to experience a bit of bumping and barging!

“It’s going to be pretty nerve wracking getting on the grid at Brands Hatch! I think the first race is the one everyone will be a little bit nervy, but once we get that out of the way I think we’ll all settle into it and just have a lot of fun.

“Everybody’s got a realistic expectation, we’re not here to try and become Formula 1 drivers of the future, we’re here because we’re all massive fans of motorsport and it’s an opportunity to get out there and race in a great car, on a number of fantastic circuits and it’s going to be a great experience.”

Hoy admits that he will use his cycling experience to help him while behind the wheel. “There are similarities with cycling and motorsport. In cycling you’re looking ahead and trying to predict what’s going to happen ahead of you, and trying to find gaps, and it’s the same with motorsport. You just have to focus on yourself and not worry about your opponent and what everyone else is doing, because that is when you get distracted and everything happens a lot quicker here.”

Finally, Hoy turned his attentions to the Brands Hatch track, the venue for the race in June.

“Brands Hatch is a spectacular venue. It’s great for spectators because you can see most of the circuit from one spot, and it’s really picturesque, with big undulations and big hills. It’s a legendary place and it’s great to be here and finally experience it for myself.”

The Radical SR1 Cup, run by MotorSport Vision Racing (MSVR) is open to drivers who have never held a race licence before, or are still eligible to wear a novice cross on the rear of the car (for those drivers that have competed in six or fewer races). The SR1 Cup will guide aspiring sportscar drivers through the process of getting on the grid, with a detailed programme of driver training and technical tuition. The championship will see drivers compete in eight races held at MSV circuits Brands Hatch (Kent), Snetterton (Norfolk), Cadwell Park (Lincolnshire) and Oulton Park (Cheshire).